To foster collaboration and creativity, get on your feet … and start walking …

It’s almost always the same. When I work with teams during our Innovations Labs and ask the members to get on their feet and group around a white board, a flip chart, or even a tall pub table, the group dynamics change significantly. I still might have to intervene occasionally and do what I call ‘status treatment’ – equalize status within working groups in order to obtain the participation of all members in the work of the group – but in general, all the team members are more engaged in the task and also interact with each other more.

Next time your team has to come up with new ideas, ask them ‘to take a hike’ 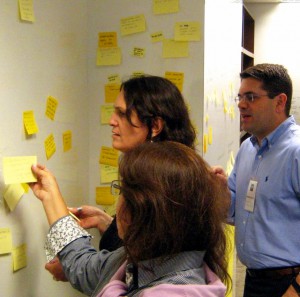 In the late 90’s, at the Stanford Learning Lab, we were working on a R&D project to design the next generation of learning spaces. Our many prototypes eventually led to Wallenberg Hall, which itself was a prototype for the Stanford d.school, the home of the Hasso Plattner Institute of Design, and in many ways one of the best examples for spaces that support creative collaboration.

Throughout the design and prototyping process, we played with the various characteristics or variables of the space. The objective was to see how these variables, ranging from the ambience of the space to how people and space elements interact, influenced desired behaviors, desired learning.

When we looked at the relative position of a person’s body during specific activities, we discovered that when people were sitting around tables in their chairs, they were not generating as many ideas as when they were in a more active, standing posture that made it easy for them to connect and engage. So if you want people to be reflective, or have in-depth discussions, let them sit in chairs. But if you want them to generate ideas and collaborate, ask them to stand up.

Now that I have you up on your feet, let’s start walking …

A recent study by Stanford researchers I mentioned before looked at the creativity levels of people while they walked versus while they sat. Their findings were that a person’s creative output increased by an average of 60 percent when walking. 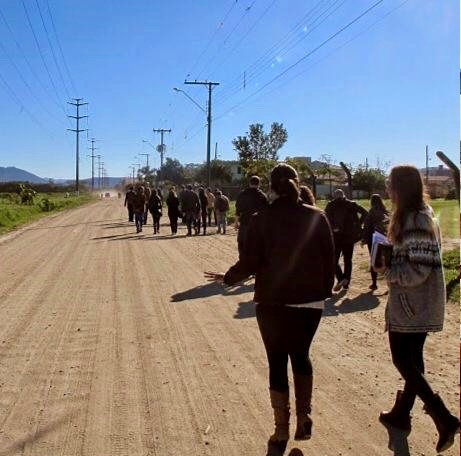 So next time your team has to come up with new ideas, not only ask them to get on their feet, but also encourage them to take a walk around the block, or the company or university campus.

A copy of the full study can be accessed here.

An excellent resource that provides a wide range of tools and insights about creating innovative spaces is Make Space: How to Set the Stage for Creative Collaboration by Scott Doorley & Scott Witthoft from the Stanford d.school.

Reinhold Steinbeck is an innovation and learning design specialist impacting the business, education, public, and social enterprise sectors via human-centered design. In addition to leading IntoActions, he is an instructor with the dGlobal at Stanford program and represents the Stanford University Global Design Innovation initiative across Latin America.
Prev Post
Next Post

© 2021 IntoActions LLC. San Francisco. All rights reserved.
Back to Top