Design with, not for! When you want to design something for the elderly, hire one!

This was definitely one of my most inspiring commutes between San Francisco and Stanford University.

Arriving at the Palo Alto train station, I assisted an elderly lady with her bag as she was getting off the train. When I was returning back to San Francisco a few hours later, I noticed her again, waiting for the same train at the Palo Alto station. So I approached her and offered my “baggage handling service” again.

Design solutions not only for, but with members from your target group

During our chat, Barbara happened to mention that she had just finished her work for the day. So I asked her where she worked. She said IDEO (the design innovation company headquartered in Palo Alto). That, of course, got my attention. 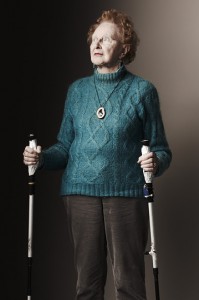 We continued our chat on the train. Barbara told me about her background and her work at IDEO (we even chatted a bit in German, as she lived in Germany at some point in her life), and I shared with her some of the work I have been doing in the area of design innovation, including my work in Brazil.

When I asked her how long she had been working at IDEO, I excepted something like “oh well, for 20 years or so …” But she just recently started at IDEO, which I found intriguing, as – especially – Silicon Valley has this reputation of being a “place where people over the age of 30 are considered over the hill and out of fresh ideas” (see article by Timothy Hay in the Wall Street Journal).

So I asked her how she got the job, and her brief answer was, “well, I applied for it.” Apparently, she applied for the job – a mix of volunteering and paid consultancy – at age 89!! Barbara is currently working one day per week for IDEO, giving her perspective on products for the elderly that IDEO is working on. She said that she was ‘re-inventing the 90s.’

Not only is she the best example of what you might describe as an “extreme user.” As an occupational therapist she has also designed some of her own products in the past. So double Kudos to IDEO for hiring her. She loves her interactions with the folks at IDEO, and I got the impression that they look at her as the grandmother of the IDEO family.

By the time the train arrived at 4th and Townsend in San Francisco, I was on an inspirational high. It’s never too late to embark on a new adventure. And I definitely want to have fun doing meaningful things and being surrounded by smart and passionate people when I am 90 years old. And as someone who runs an innovation consultancy, I am more determined than ever before to design innovative solutions not only for, but with members from your target group.

Reinhold Steinbeck is an innovation and learning design specialist impacting the business, education, public, and social enterprise sectors via human-centered design. In addition to leading IntoActions, he is an instructor with the dGlobal at Stanford program and represents the Stanford University Global Design Innovation initiative across Latin America.
Prev Post
Next Post

© 2021 IntoActions LLC. San Francisco. All rights reserved.
Back to Top